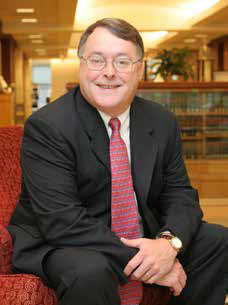 I have worked with the Catholic Charities Legal Network throughout my entire legal career.  I began working with the Legal Network in 1989, the year it was first formed as the Archdiocesan Legal Network. My first case was both memorable and satisfying.

I signed on to represent a client with a domestic violence matter, but my experience turned out to involve much more than I envisioned.

The client was a Muslim woman, Noor,  (fictional name has been used to protect the client’s confidentiality) who was the subject of physical and emotional violence for more than a year at the hands of her live-in boyfriend (and the father of her children). When we first met, Noor was so overwhelmed by this domestic violence she could barely speak.

We initially obtained a restraining order against the father of Noor’s children to deal with the immediate domestic violence. Over the next few years, we litigated the custody of her two children. This was particularly critical because one of her children had a learning disability that required special educational assistance. The father disagreed with the diagnosis and had the child withdrawn from the school where he was receiving assistance.

Ultimately, we were successful and Noor was awarded sole custody of her two children, which gave her the authority to make all educational decisions for them.

Flash forward a few years after my formal legal representation ended. I heard from Noor, who reported that both her children were in college.  She had personally blossomed. She was working for an advocacy group and was testifying before the DC City Council on the importance of assistance for children with learning disabilities.

I heard from Noor again this past Christmas.  Her kids are now in their 40s and both doing very well.

Thanks to the Legal Network, I was able to alter the course of three lives for the better.

Moreover, the experience that I was able to get as a result of this case was invaluable. As a very young lawyer, I was able to litigate the case from beginning to end. I handled all of the discovery, took multiple depositions and appeared in countless hearings. I was nervous my first few times in court but became more confident after a few appearances.

Over the years, I have continued to take a variety of cases from the Legal Network. These cases have included family law cases, such as the one above, as well as landlord-tenant cases.  I have even negotiated a software license agreement. I also have mentored less-experienced attorneys at my firm, who are like me was when I took on my first pro bono case.

Each case and client have been different but equally gratifying. One of my Legal Network clients was a woman who sat outside the White House protesting nuclear weapons for over 40 years.  As you can imagine, as a client, she was a little stubborn.  In another case, I represented a group of nuns in a tax dispute with the D.C. government.

In sum, I have gained a great deal of personal satisfaction from the cases that I have taken on behalf of the Legal Network, and I look forward to my next case.

Catholic Charities is recruiting 50 volunteers in a “Say Yes! Fall Call for Volunteers” campaign. Volunteers will make a weekly commitment of service over the next year and serve in various roles, including with the Catholic Charities Legal Network where John McCarthy has been a longtime volunteer. Deadline to apply is Oct. 14. For details, visit our volunteer page.