A friend to many Catholic young professionals in the D.C. area, Father Mark Ivany was excited to learn about the 83.33 Society, a group of fellow emerging philanthropists who work together for benefit of Catholic Charities. 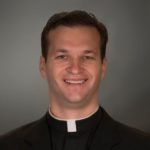 “I’ve been a donor to Catholic Charities for the past several years,” said Father Mark, director of priest vocations for the Archdiocese of Washington. “Joining my friends in a group that leverages our consistent and collective giving was an easy decision.”

The son of retired Maj. Gen. Robert and Marianne Ivany, Father Mark traveled the globe with his military family that also included three siblings. He was a Division II All-American lacrosse player at Massachusetts’ Merrimack College in 2000. Following college, he worked in the U.S. Senate and the Office of Congressional Affairs at the Department of Housing and Urban Development. During this time, he continued his love of lacrosse as a coach at Gonzaga College High School, where friendships with members of the 83.33 Society developed.

Father Mark is a 2008 graduate of the Immaculate Conception Seminary in South Orange, N.J., where he earned master’s degrees in divinity and systematic theology. He was ordained a priest in the Archdiocese of Washington and began his pastoral work at the Church of the Little Flower in Bethesda, where he served until 2011. He was installed as pastor of Assumption Church in Southeast D.C. in 2012 and soon after partnered with Catholic Charities to renovate and expanded the parish food pantry into the Pope Frances Outreach Center, which now provides Thanksgiving and Christmas baskets to over 3,000 children and seniors, while also distributing food and clothing to families and individuals year-round. In 2015, Father Mark was assigned to St. John Paul II Seminary in Northeast D.C., where he has served in different capacities.

As chaplain to the 83.33 Society, a new group of young professionals and supporters, Father Mark will provide spiritual support to its more than 75 members. Those involved in the society provide recurring donations of $83.33 a month, which is the equivalence of $2.75 a day and the cost of feeding a Catholic Charities’ Cup of Joe breakfast to a person who is homeless.

“It’s important to me,” he said, “to try to live and cultivate a culture of giving to those in need as our Catholic faith teaches us.”