This “Voices” column originally was published in the Catholic Standard and El Pregonero.

You may have seen news accounts in recent weeks of buses of immigrants arriving in the Washington area from Texas. Catholic Charities DC has played a significant role in receiving and welcoming these people who come here with papers to be supported by family and friends during difficult times. There are differing views on immigration, so I want to say a word about how and why we at Catholic Charities are involved.

There are really two issues. The first is border security, which I believe is important. I think most of us believe that we cannot have wide-open borders for those who come our way.

The second is the humanitarian crises. People come to us from different countries because the situation in their homeland is exceedingly difficult and often dangerous. Many worry every single day about the safety of their children because of the violence perpetrated throughout those regions.

Most people love their homeland and would prefer not to leave, but they endure the difficulties and pain of separation because they feel they have no other option. Life for them in their home countries has become unbearable because of the danger inflicted upon them and, especially, their children, so they do whatever they need to do to get to a safer place.

This is a “both/and” situation. We need both border security and a humane response to those who come seeking asylum in our country because they face potential death for themselves and their children. 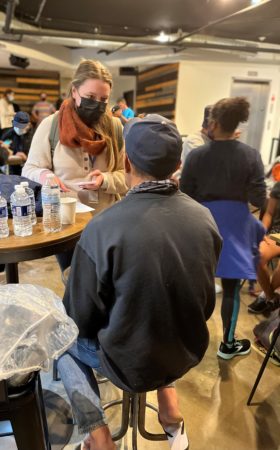 During Holy Week, Catholic Charities DC received calls from Catholic Charities USA about a bus coming our way from Texas, sent by Gov. Greg Abbott and nonprofits in the state, transporting about 30 immigrants looking for safety and security in our country. Eighteen of the people on the bus were met by family and friends, and immediately left with them to begin their new lives. Twelve needed more support, which we stepped in to provide. This included bus fare to other cities where they had family or friends, gift cards to help provide incidentals while they traveled, clothing, and more. One baby had only a diaper on. We provided a few toys as well.

Our team humanely greeted these individuals who came here without homes or possessions. I was so proud of our staff, who greeted two more buses over the next two days. From those first three buses, we helped 74 people start to find their way, and more buses have continued arriving since then.

I do have some concerns. We felt that the federal and city government needed to step forward to take a bigger role assisting those in need. Politics were a part of those decisions, but fortunately other nonprofits joined us in offering support.

We simply do not have the bandwidth to be responsible for every single bus coming here, especially as other nonprofits in Texas consider sending more buses. We do not want to reach the point of being unable to meet the needs of those on the buses, so I am hopeful that the government and other nonprofits will step up. Catholic Charities DC has happily agreed to provide assistance one day each week to people arriving on buses.

In just the first couple of weeks, I saw families and individuals giving up everything they have in hopes of finding the kind of safety and security that we are blessed to enjoy every day.

I saw our staff step up with absolute commitment and dedication to those in need. I saw Catholic Charities DC at its best, and Catholic charity at its best. People came to us in need, and we responded with everything from a warm welcome to showers and clothing to navigators helping them take the next steps on their journeys. Sister Sharlet Wagner, who leads our Newcomer Network, was one of the leaders in this effort, joined by many others.

I send a great big thank you to all who support us in this effort, from our staff to other nonprofits to all who donate. A big thank you as well to those who may have strong political thoughts about borders and immigrants but also understand that we will always help those right in front of us who need assistance. Our motto at Catholic Charities is to say “yes” to all who come our way, and, as these immigrants are sent to our region, we will do our best to serve them, help them, and guide them toward whatever they need to be safe and welcomed in our country.

You may have heard me say before that I ask myself the same question almost every night when I go to bed: What did I do today for people in need? During Holy Week and in the days since, I have gone to bed thanking the Lord that we have such a great staff who stepped up to help and support so many people.

Our Church is blessed to have Catholic Charities do so much for so many. Our workers are often first responders and unsung heroes. We have continued to make a difference for those who come to us in need, even through a pandemic. I could not be prouder of our people and that legacy. It is who we are now, and who we hope to be for decades to come.

(Msgr. John Enzler, the president and CEO of Catholic Charities of The Roman Catholic Archdiocese of Washington, writes the “Faith in Action” column for the archdiocese’s Catholic Standard and Spanish-language El Pregonero newspapers and websites.)