Anne Kline remembers precisely the moment she met her future husband, Geoff Pohanka. She was at a black-tie charity event in 1998 when he walked up and asked her to dance. Successful, well-established members of the Washington, D.C., area business community, they had a mutual friend and shared interests.

At the time, Kline was the senior vice president of a bank in Potomac. Msgr. John Enzler was pastor of nearby Our Lady of Mercy Church, who first met Kline when he stopped at the bank to deposit money in the church’s account.

Father John later married the couple. And, when he became president and CEO of Catholic Charities in 2011, the couple began giving to the agency. 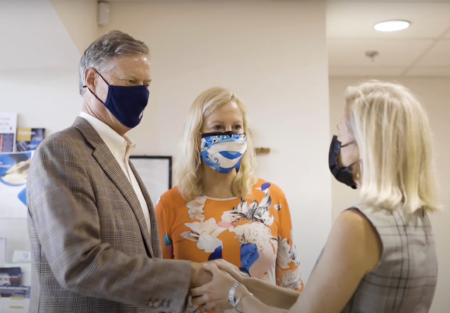 Through their John J. Pohanka Family Foundation, the couple has supported the conversion of an old restaurant into the agency’s Susan Denison Mona Center in Temple Hills. The center provides medical and dental care, legal and immigration services, and food programs. The couple has been especially supportive of the center’s dental clinic, recently funding a wish list that included dental equipment as well as the coverage of fees for those who can’t afford to pay.

Realizing that the agency had not been as involved in Prince George’s County as in other parts of the D.C. area, Kline and Pohanka introduced Father John to county civic and business leaders.

Pohanka, a third-generation auto dealer, is chairman of both the foundation and the family-owned Pohanka Automotive Group, which has dealerships in Capitol Heights in Prince George’s County as well as others in Maryland, Virginia, and Texas. Pohanka, whose grandfather started the business in 1919, has worked for the company since 1973. Kline serves as director of the foundation.

Prince George’s County is home to a largely minority population that has historically been medically underserved. “It means a lot to us that Catholic Charities is providing health care services in Prince George’s County,” says Pohanka. “These are our neighbors; this is our community.”

Pohanka notes that the foundation’s mission reflects the culture of the company, which supports charities, schools, youth programs, and community-based organizations in Prince George’s County and other areas where its dealerships are located.

Two of Pohanka’s three children from a previous marriage – Laura and Kevin – work for the Pohanka business and serve on the foundation board. His son, Erich, lives in Asheville, N.C.

From the time she was “a little girl going to church with a quarter in my envelope,” Kline, a Catholic, says she was raised with the belief that she should help those in need. Pohanka grew up the same way in the Episcopal Church and appreciates the mission of Catholic Charities, which serves all who are in need regardless of religious affiliation.

“I know that when we give to Catholic Charities, we’re helping people in the D.C. area,” says Pohanka. “With some organizations, you’re not sure where your money is going. But with Catholic Charities, I have complete confidence, knowing that those funds will go where the needs are the greatest.”

Kline notes that the couple’s support of Catholic Charities is also a way of honoring Father John, who is scheduled to retire as the agency’s president and CEO in spring 2023. “Our gifts honor his leadership and help to ensure that his legacy will continue,” she says.