Related: In His Own Words
Photo gallery

Rev. Msgr. John J. Enzler, who used the motto “Say Yes” to grow Catholic Charities of the Archdiocese of Washington over the last 11 years, has announced that he will retire as president and CEO next spring.

Catholic Charities, the most comprehensive social services agency in Washington, has been led by Father John — as he is affectionately known — since May 2011.

In spring 2023, he will move to a supporting role in which he will continue to advocate for those who live in poverty and support the agency’s social justice mission. 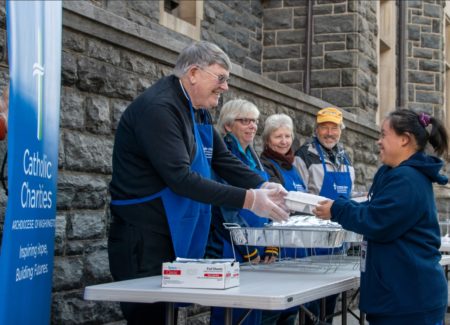 in the agency’s leadership will coincide with the 50th anniversary of Father John’s ordination as a priest in The Roman Catholic Archdiocese of Washington. Father John’s legacy of service will be celebrated at the 2023 Catholic Charities Gala on April 1.

“Father John has served the poor with incredible devotion during his tenure as CEO of Catholic Charities for the Archdiocese of Washington,” said Cardinal Wilton D. Gregory, archbishop of The Roman Catholic Archdiocese of Washington. “His skills and ability to encourage others to engage in the Church’s ministry of social justice has been a blessing that will be difficult to replicate. Merely thinking about Msgr. Enzler’s approaching retirement brings me great pride and deep gratitude.”

Catholic Charities DC serves more than 167,000 men, women and children per year in Washington and five suburban Maryland counties. More than 50 programs provide care for families, empowerment for individuals, food assistance, health care and other services. The agency also operates some of D.C.’s shelters for those without homes. 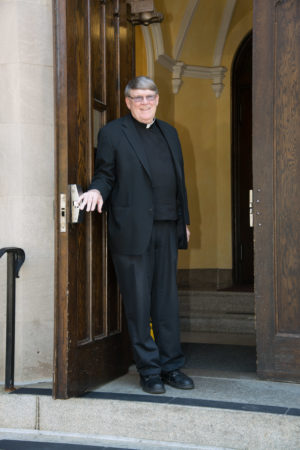 Under Father John’s leadership, more than 2.9 million meals were served to the food insecure and 7,301 people were provided medical and dental assistance in the last fiscal year.

“Over the years, I’ve learned the importance of doing your best to say ‘Yes’ in every possible situation and ‘No’ only when you have to,” said Father John, 75.

With his call to action, the agency created new programs to serve people with specific, unmet needs. They include the Compass program, which offers intensive case management for people in Wards 7 and 8; and the Newcomer Network, which helps immigrants become established in Montgomery and Prince George’s counties.

The Susan D. Mona Center in Prince George’s County was established during his tenure, as was a large solar array in Northeast Washington.

During the pandemic, Father John led the agency through COVID-19 challenges to conduct large-scale food distributions and create new teleservices, which allowed the agency to continue to offer health services, job training and ESOL classes. As a result of his leadership, the agency served more than 235,000 people — a record — in the pandemic’s first year.

In 2015, Father John welcomed Pope Francis during his visit to Catholic Charities’ downtown headquarters. The pontiff greeted 500 people who were under Catholic Charities care and recognized the compelling work of the agency.

“I am immensely proud of the work that we have done in support of those who are vulnerable,” Father John said. “And I am very grateful for the commitment our staff has shown and for the heart-warming support of our many donors and volunteers. While I no longer will hold the CEO title next year, I will remain dedicated to helping Catholic Charities grow and serve.”

Before leading Catholic Charities, the Bethesda native served as pastor at three parishes in the Archdiocese of Washington — Blessed Sacrament in D.C., Our Lady of Mercy in Potomac and Mount Calvary in Forestville. He was associate pastor at the Church of the Little Flower in Bethesda and held several roles with the archdiocese. He currently is in residence at St. Bartholomew parish in Bethesda.

“Whether it was the unemployed looking for work, the hungry looking for food, or the homeless looking for shelter, he has been there to serve,” said Kevin Virostek, chair emeritus of the Board of Directors. “On a personal level, he has always been there to baptize our babies, preside over the marriages of our children, counsel us in troubling times and bury our loved ones. He has never demonstrated the ability to say ‘No’ — only ‘Yes!’”

A national search for a new CEO has begun by the firm Russell Reynolds Associates. Father John’s successor will be chosen from among candidates identified by a search committee led by Veihmeyer and Virostek.