Joe Dempsey stood tall in the vast parking lot, signaling to hundreds of cars as they snaked their way to a distribution point for free food and meals. With his son nearby, Joe directed food assistance as it was given out to a community struggling with the economic fallout of the pandemic. 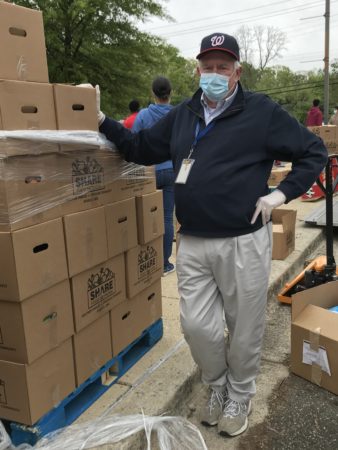 To his son, Kevin, this was more than a day to help others who were less fortunate. “We’ve known that the work he’s done throughout his career and life was always meaningful and impactful,” Kevin said of his father. “But it was great to see that come to life. The people were so thankful.”

Joe, director of special projects at Catholic Charities, has dedicated a lifetime to non-profit leadership, first as a teacher and then as dean of students at Gonzaga College High School and later as executive director of the Order of Malta. He now works closely with Msgr. John Enzler on outreach to communities in Prince George’s County and Southern Maryland, including overseeing community food distributions.

Beyond work, Joe and his wife, Cindy, have always been committed to community service to assist the poor and vulnerable, a pillar of Catholic social teaching. Joe and his sons, Michael, Kevin and Patrick, have been loyal volunteers with the Greg Gannon Food Drive since its inception, propelling the drive to parishes across the archdiocese. During the pandemic, the three sons have volunteered with their dad at Catholic Charities’ food distributions.

“It is very important to us to give both time and money to charities we believe in and really care about,” Joe says.

Joe and Cindy believe it’s essential to teach younger generations about the importance of giving back. For several years at Christmas, all three sons made gifts to Catholic Charities and three other organizations instead of buying presents for their parents.

This is “something they are committed to doing even when I am not watching,” says Joe, who is now guiding his sons on estate planning, starting with annual gifts and engagement with the mission of Catholic Charities.

Seeing the growing population of those who are struggling with food insecurity and access to resources, “including Catholic Charities in our estate planning will ensure we can support the organization at a much higher level than we can in our lifetime,” he says. “Getting my sons involved has engaged them in the agency’s critical work and inspired them to begin planning their own estates.”

“Whether it’s through our own Catholic upbringing or following our father’s work,” Kevin says, “it’s been engrained in us that not only is your faith important but acting upon that faith when you’re in a position to help others is always very important, too.”

The Dempsey family’s collaborative approach to giving back has been an inspiration to other families who look at philanthropy as a family value and an activity shared between generations.

As planned gift donors, the Dempseys are members of the Catholic Charities Good Samaritan Society, a group of people who, through their wills, have committed to ensuring that the agency can provide for future emergency food and medical care, legal assistance, behavioral health management and assistance for those with developmental disabilities. We rely on our Good Samaritan Society members to safeguard Catholic Charities’ ability to serve others for many years to come.