The staff and leadership of Catholic Charities of the Archdiocese of Washington extend their hearty congratulations and best wishes to Archbishop Wilton D. Gregory, who has been named a cardinal by Pope Francis. 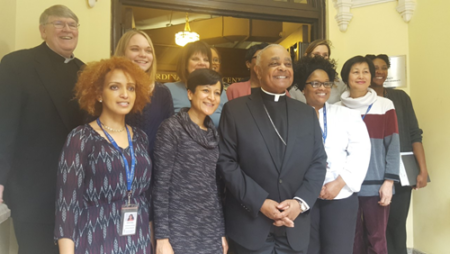 As the social service arm of the Archdiocese of Washington, Catholic Charities is proud to have Cardinal-designate Gregory as a leader for social justice, and we rejoice in the naming of the first African American cardinal in the United States.

Cardinal-designate Gregory is an integral part of who we are, and his leadership is a beacon for us. Illustrating his commitment to the poor, the vulnerable and immigrants, his first site visit last year as the new leader of the archdiocese was to Catholic Charities.

Since then, he has blessed our solar array project, supported our community service by attending the Mid-Maryland Mission of Mercy Dental Clinic and presided over the Red Mass where Pro Bono Legal Awards were announced.

At a staff town hall meeting in July, Cardinal-designate Gregory spoke about his life, his challenges and his vision.

“I remain in solidarity with you in your work as you provide fair and equal service to all who approach Catholic Charities for help,” he told our staff. “I understand that many of you have been personally affected by incidents of prejudice and discrimination. … Together, we will pray and work for justice, dignity and respect for all of God’s children because we are made in His image and for His glory in all its goodness.”

Catholic Charities wishes him well as he becomes Cardinal Gregory at a Nov. 28 consistory at the Vatican.