More than anything, Deon Brown wanted a place to call home.

The lifelong D.C. resident lost transitional housing after a kidney transplant and the inability to work put him behind on the rent. He fell on hard times. But having a home was central to his commitment to his daughter. So, when Sister Mary Louise Wessell of Catholic Charities referred him to the COMPASS program, he went all in.

COMPASS is a neighborhood-based team of social workers and social work interns who, through the transformative power of relationship-building, help residents of the District’s Wards 7 and 8 reach their goals. Last year, 76 members were welcomed to COMPASS with the help of nine volunteers who dedicated their time to the program’s goals. 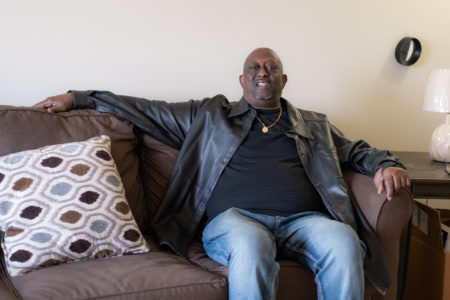 For Brown, his goal was clear: find affordable senior housing.

To reach that goal, Brown and his COMPASS partner met once a week — and often more — to set short-term goals and track accomplishments. “It gave me a sense of hope,” he says. “It allowed me to know that my life would change.”

After determining which neighborhoods he preferred, he worked to identify potential apartment complexes, filled out housing applications, toured possibilities and talked with property managers.

Being a part of COMPASS, Brown says, is “a family kind of gathering. We all work together. You have to do your part; they do their part. We come together as a team, and we strive for our goals. In doing so, it’s not always easy. But you hang in there and keep the faith that it will work out.”

Brown was diligent in completing tasks, even taking an eight-hour course to receive an inclusionary zoning certificate from the Department of Housing and Community Development’s affordable housing program. “He did the work. He put forth his best effort. He stayed dedicated,” Andrews says.

Just as he turned 62 last year, Brown — who had over the years battled health problems, experienced homelessness and sought a true place to call home — moved into a one-bedroom apartment in Northeast D.C.

As he looks out over the balcony of an eighth-floor apartment that he calls a small palace, Brown feels a sense of gratitude and gratefulness. “I’ve been through a lot. I worked through some ups and downs,” he says, adding that his success came from “being patient, believing in God and knowing that everything’s going to be OK.

“It means the world to me to be in my own bed and be able to have my daughter come over to talk and have dinner.”

“Mr. Brown is a perfect example of what can happen when you connect vulnerable groups to the services, resources and opportunities that help foster a healthy, sustainable and long-lasting life,” Andrews says.

Brown eventually would like to buy a home of his own to leave as a legacy for his daughter. To do that, he must repair his credit score. So, he’s now working with Catholic Charities’ Financial Stability Network.

It’s also important to him to share his story so others can benefit from his experiences. “I want to continue to live successfully and try to pass this on to people who have been through what I have been through,” says Brown, who has spoken to prospective COMPASS members.

He tells them: “Do as you’re told. Believe in the system. Believe in yourself. Believe in those working with you. Show respect. Show appreciation. Work as a team. And in the end, you’ll be rewarded.”

The program, he says, “It changed my life, my hope, my spirit.”